Andrés Jarabo, with his collection ‘Multimatteria’, won the VII Young Designers Contest held at the Santa Cruz Exhibition Center in which five finalists participated. After seven editions, this national contest organized by the Cabildo de Tenerife is established as a platform to promote entrepreneurial projects and new values in the sector, remarks the insular councilor of the Employment, Trade, Industry and Socioeconomic Development area, Efrain Medina. María Isabel Fajardo and Roberto Caro came in second place with their proposal ‘419’.

For the first time, this important contest was broadcast live by streaming to the whole world through the official website of Tenerife Moda (www.tenerifemoda.com) and the institutional television channel Tenerife TV, http://canaltenerifetv.com/channels/corporate-file.

Trained in Fine Arts, with courses in pattern making and confection, his proposal is based on a futuristic style that fuses fiction, new technologies and reminiscences of ancient civilizations. A collection full of ethnic touches of “modern but traditional” designs in which sober lines and refined cuts predominate in cool, neutral tones such as greens, blues, grays, blacks and whites.

“For me winning the Young Designers Contest personally involved a whole experience and a lot of satisfaction, that a specialized jury valued my work,” says the young designer.

When he was participating in the contest, he was already working on teaching drawing and he is currently continuing with it. “I also carry on with my small workshop with its client portfolio, working on request, which keeps me active and helps me to not give up in this world of fashion so fascinating and at the same time so competitive.”

The designer continues with his brand Humo, which is characterized by arts and crafts, from which he looks at each garment in an individual and personalized way pampering each step of the process until it reaches the hands of the client. Oblivious to seasons and trends, each garment is unique for its design and quality.

Jarabo highlights his work in the field of performing arts, “with which I enjoy every experience”.

About the event and the organizing staff he only has thankful words, remembering them as “a fabulous team”. To which he adds, “from the Cabildo de Tenerife you make a great effort to give visibility to the work of young emerging designers and I congratulate you once again for that. You should be an example to follow for many Regions. ” It has been a source of pride and pleasure for me to have been part of your “family”. 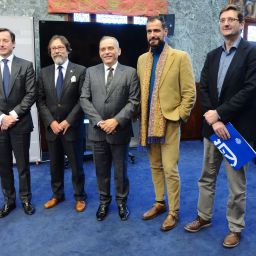 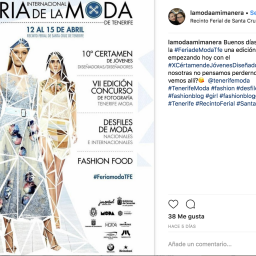 Winner of the Contest hashtag #feriamodatfe